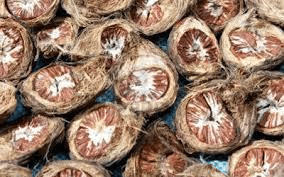 The danger of the betel nuts!

It is one of the most popular psychoactive substances in the world, in fourth place after nicotine, alcohol, and caffeine. But while betel nut is an important cultural and social tradition in many countries, growing evidence points to serious health effects from regular use.

Betel nut has a long history in South and Southeast Asia and the Pacific Basin. In Guam and other Pacific islands, its use can be traced back as far as 2,000 years. A habit passed down through generations, chewing betel nut is a time-honoured custom for 10–20 percent of the world’s population.

Many people chew betel nut for the energy boost it produces. This is likely due to the nut’s natural alkaloids, which release adrenaline. It may also result in feelings of euphoria and well-being.

Some traditional beliefs hold that it may offer relief for a range of ailments, from dry mouth to digestive problems. However, the drug has not been well tested in clinical trials, and evidence of any health benefits is limited.

Research has revealed some serious health risks of betel nut. The WHO classifies betel nut as a carcinogen. Many studies have shown a convincing link between betel nut use and cancer of the mouth and oesophagus.

A study in the Journal of the American dental association reports that betel nut users are at a higher risk for oral submucous fibrosis. This incurable condition can cause stiffness in the mouth and eventually the loss of jaw movement. Regular chewing of betel nut can also cause gum irritation and tooth decay. Teeth may become permanently stained deep red or even black.

What To Do If A Tooth Is Avulsed?

I recently moved to Muswell Hill and contacted Muswell Hill Smile for a consultation. Now some months and 4 visits later I’m very happy with the results. After 20 years in London I finally found the perfect dental practice; professional service and super friendly staff in clean and well equipped premises. Jackie and Camilla made dentistry a pleasant experience – will never go anywhere else!

The best place to go for orthodontics!!! Very happy with the way my teeth are looking. Professional service and great price.

To our loyal clients at Muswell Hill smile
As you are aware we have had to close in line with government regulations however our team has remained assisting patients with any dental emergencies over the phone and email.
The Prime Minister has announced dental practices can reopen from the 8th of June 2020 however further guidance from numerous regulatory bodies have required many changes at this stage to the way that we can deliver dentistry.
Initially only one dentist will be using both our surgeries to allow requested time between some procedures according to the new guidelines at current stage. There will be also reduced number of team members at practice due to in house social distancing measures required. Current requirements are in accordance to the national “alert level 4” declared by the government and will change according to the level of risk.
Despite the short notice, we were working hard and endeavouring to open as soon as 8th of June. We prioritise appointments for urgent dental treatments and all patients where appointments had to be cancelled before lockdown & their oral care may deteriorate due to delay. Please kindly be patient as the list is considerable and our capacity is reduced at this time.
We are working hard to put in place the necessary protocols enabling us to proceed with all dental procedures soon. We will not let you down, please contact us as before per email: info@muswellhillsmile.co.uk or fill the enquiry form below and we will get back to you soon.
We look forward to welcoming you all back
Your team at Muswell Hill Smile
Click here to fill our online form